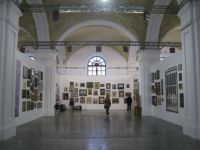 14.02.2013
One of the largest, most systematic and most active nonconformist artistic movements of the post-Stalin 1960-70’s was happening in Odessa.

It is worth mentioning that, as early as in 1967, Odessa artists, Valentin Khrushch and Stanislav Sytchov, had deliberately hanged their paintings on a construction fence, near the famous Odessa Opera House, years before the famous Moscow Bulldozer Exhibition in 1974. Both of them later joined the main group of the “founding fathers” of the Odessa nonconformist art – O. Anufriev, V. Strelnikov, V. Maryniuk, V.Basaniets, and also O. Sokolov, who was active independently in Odessa at the time.

A solo exhibition of Victor Maryniuk, organized in 1961 at Anufriev’s apartment, opened the era of “apartment” exhibitions, and by 1975 there were more than 30 artists taking part in the nonconformist apartment exhibitions, held over five Odessa apartments, not including artist’s studios. One of the most prominent, active, and constant, in fact, round the clock, exhibition venues was the apartment of Volodymyr Asriev, on 19 Bebel Street (after the Perestroika, renamed back to ‘Jewish Street’).

The project’s idea of “19 Bebel Street: Apartment Exhibition” is to restore in details the legendary apartment on 19 Bebel Street, to recreate the atmosphere and the spirit of freedom that existed during the totalitarian ban on dissent. And, through this prism, to show bright and bold Odessa nonconformist art, most of which has now become the national legacy.