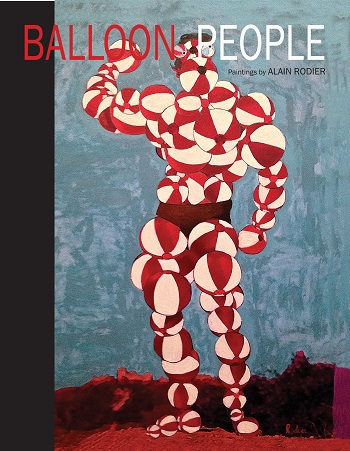 Dymchuk Gallery presents the catalogue of Alain Rodier’s solo exhibition “Balloon People”. The catalogue contains the photos of works from the show, the text by Alain Rodier and his short biography.

“It all started with this one man.

People were wondering what was he doing dragging these big balloons. Like the ones, they used to play with on the sandy beaches of the Soviet Union when they were kids. He would be seen dragging these balloons day in and day out until the image of him would become closely associated with the one of those balloons. Some say the balloons represented all his life’s baggage, his worries, his regrets, but also his achievements and his success. They were so im­portant to his life that one day those balloons and himself turned into one entity.

The first balloon man was created. It did not happen overnight, but over a certain time, in which other people seemed to evolve into this strange new spe­cies…Men and women started to transform them­selves into “Balloon people”. Life was evolving quite naturally and the sight of Balloon men and women became natural. Successful balloon people had their portraits painted by famous Balloon artist who in turn helped to preserve the “balloon people’s” way of life…”