Vasyl’ Tsagolov “The Spectre of Revolution” 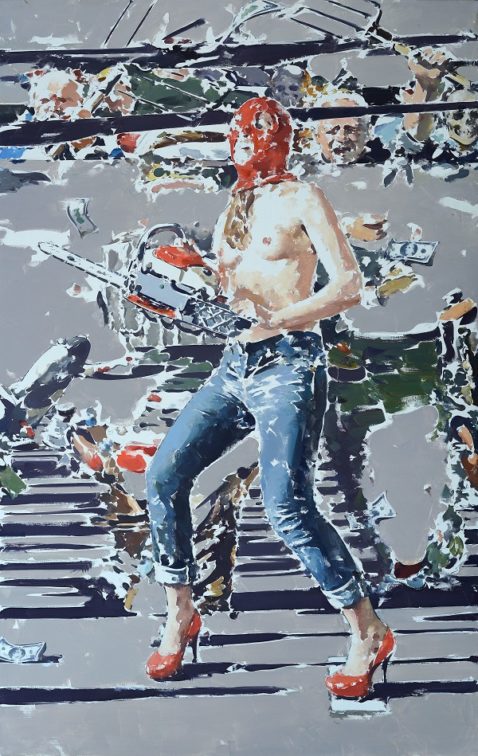 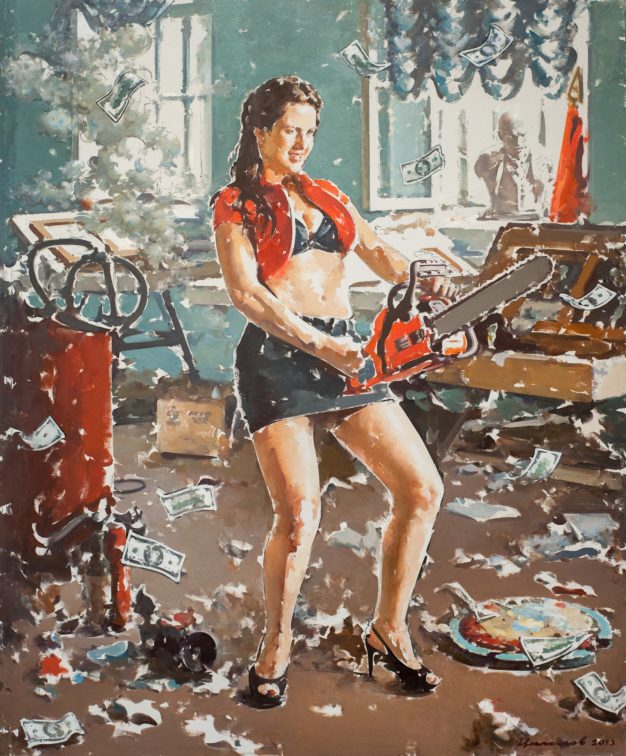 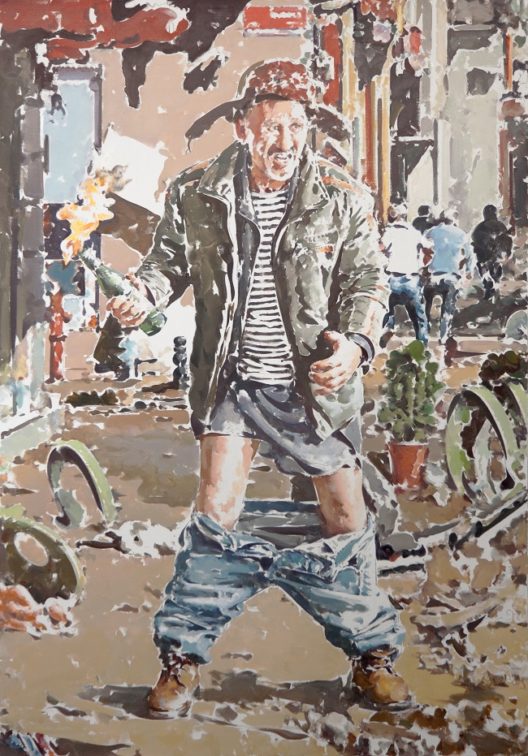 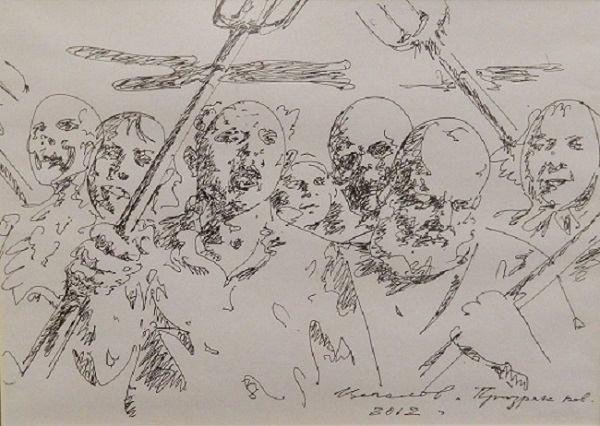 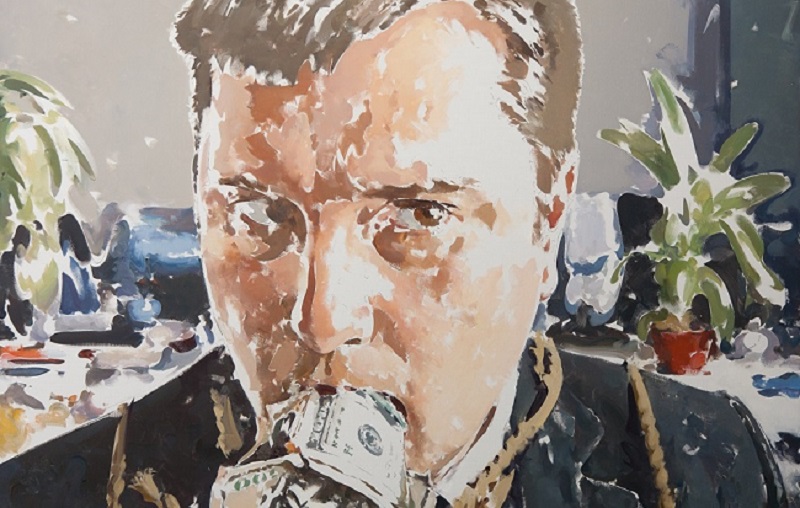 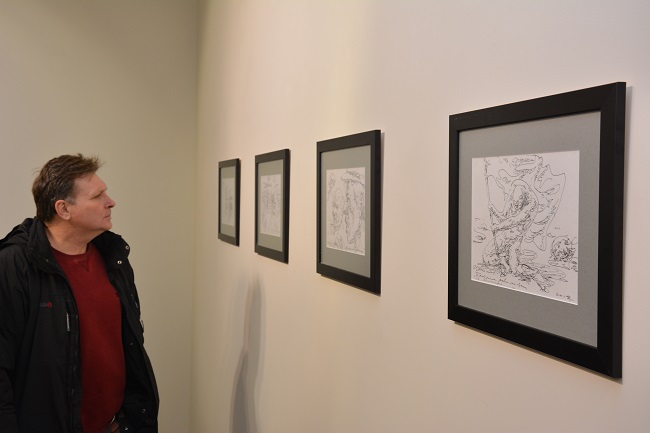 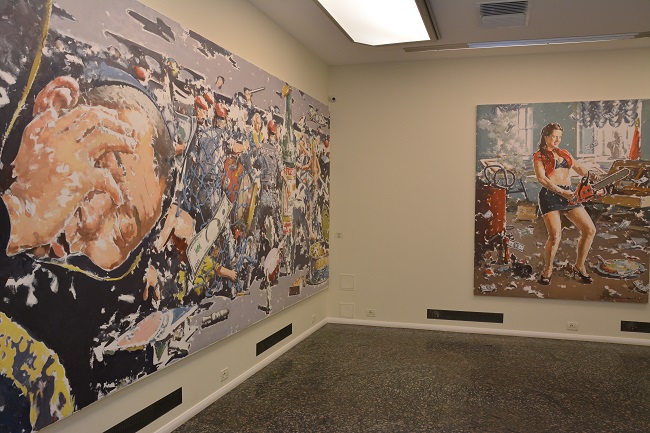 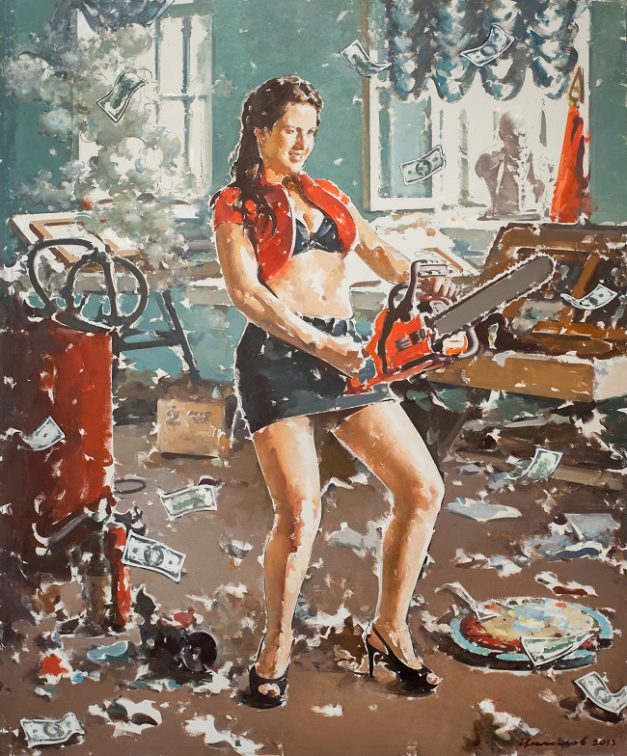 Last year, at the First Kyiv International Biennale of the Contemporary Art ARSENALE 2012, has been presented the monumental work of Vasily Tsagolov “The spectre of revolution”. At the five-meter canvas depicted running somewhere (probably to the bright future) pensioners with pitchforks. Next to them- skeletons, whose earthly life has long been over, but the revolutionary passion has not been lost and was stronger than death. On running generously poured the rain of money (of course, in foreign currency, as hryvna is not always stable). “The spectre of revolution” – the first work in the eponymous series, which over the next year has been supplemented by Vasily Tsagolov.
From 24th of October Dymchuk Gallery will present four works from the series “The spectre of revolution”. According to the author, this project should not be seen as (fashionable now) ‘left art’; in the first place it is ironic. Irony as a healthy reaction to what is happening in the world. The wave of revolutionary sentiment swept the modern world, referring to the Mass Media rephrase of the “Manifesto of the Communist Party” – “spectre of revolution haunting the world”. We should admit, that in our region this phantom is haunting too long already; the ranks of the revolutionaries replenished with new blood and old, honored soldiers are not going away. But what a revolution is on the agenda? No one knows. Maybe that is why an artist with some disbelief responds to calls, which call on to fight against something unclear. So many options against what is worth fighting: capitalism, neoliberalism, clericalism, homophobia, hunger and human rights abuses, deforestation, and so on (underline). As a result, Tsagolov revolutionaries look very impressive, though methods of revolutionary struggle is clearly not stand up to scrutiny, and what they are fighting for is not clearly articulated. Perhaps above all, it is a gesture of despair to which the people in Ukraine (where the artist lives) are brought. Despite the flexibility of Tsagolov expressive language, Ukrainian audience certainly will largely relate themselves with the characters of the artist; because the vest and cap with ear-flaps give out a simple laborer from the next door who always a little bit drunk and dissatisfied of something. Well, is he a revolutionary? Even if by some strange chance in his hand was a Molotov cocktail, would he be a revolutionary? Maybe that is why, revolution is only a phantom.

Reference:
Vasily Tsagolov was born in 1957 in North Ossetia. Lives and works in Kiev. Takes part in exhibitions since 1989, is one of the main representatives of so – called “South-Russian Wave”. The artist’s works have been sold at international auctions Sotheby’s, Phillips de Pury, exhibitions were held in Moscow, New York, Paris, Miami, Stockholm , Zagreb, Bratislava. Took part at the First Kyiv International Biennale of Contemporary Art ARSENALE 2012, blockbuster exhibition «After the wall», project “Space Odyssey “, “20 Years of Presence” and many others.