Interview with co-author of “Souvenirs from Europe” 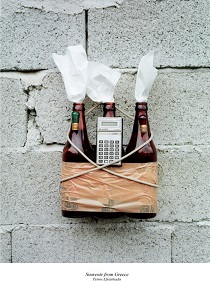 In August Dymchuk Gallery will introduce viewers to the project “Souvenirs from Europe” – a series of posters from European artists, photographers and designers. About the project and its importance in modern Europe will tell one of its authors, David-Alexandre Gu?niot.

How did you come up with the idea of the project?

In 2012, we published a fanzine, “I fear NOTHING because I have NOTHING”. It was about the 15th of October 2011 demonstration that occured in Lisbon (and in 90 countries in the world- the global day of protest). In the fanzine, we show pictures of the signs that the protesters left at night after the demonstration. There were signs all around the Portuguese parliament and in the streets. It was a strange contrast between the activity of the day, the screams and the fight of the protesters to occupy the staircase of the parliament, and then the silent of the night with all these words around. These signs were literally left at the door of the Parliament for the Portuguese representatives to read them or, at least, acknowledge them. This action: to occupy the public space with your own words gave us the idea of publish a poster with the fanzine. The poster was a huge image of a slingshot with the word PORTUGAL carved on it. And we just add the word “souvenir” at the bottom of the poster. For us, this objet trouv?, a children’s toy, became a possible “Souvenir from Portugal”.

There is a tendency to engage artists from the countries with complex relationships to the EU. Was it your initial idea?

The project is still in process. For the moment, we have 14 posters/14 countries but we intend to have more. Our conception of Europe is not based on the UE countries. For instance, we are looking for an artist from Turkey to participate. So you are right. In a first moment, we focussed on countries that have clear issues with the EU, like Greece, Portugal, Cyprus, and Ukraine. But the present crisis (first financial then economical and the political crisis) are challenging our conception of Europe, all over Europe. The French certainly don’t have the same questions and problems as the Greek have but they are also facing questions concerning Europe: What kind of political project do we want to achieve with Europe? What kind of community do we want to build?

So, our original idea was to bring together the singular aspect of each country own – and may be national – problematic and, at the end, when all the posters are presented together, to give the idea that may be some problematic are shared and something can also unify these countries – at least, a will of living together in the same (economical but also political, and geostrategic space) and defend certain values. The final purpose of the project and the exhibition is like a pretext, we want to raise these questions, and participate to a debate about the European project.

The idea of travelling, easy to deliver project seems very perspective due to the high travel expenses and especially because of hyper mobility of such a type of project. What is your consideration on this matter?

We are thinking of this project in a “continental” scale. It means that it should be possible to present it in Portugal or Belgium or Ukraine as we think that the European issue should be discussed at a transnational level. In a way, it is a project that doesn’t have a centre. It is not a project by a Portuguese publisher about Europe. We are working with artists who are not necessarily “natives”. A French graphic designer did the “Souvenir from Germany”, an Argentinian photographer did the “Souvenir from England”, a Portuguese visual artist did the “Souvenir from Belgium”. It is not a project about nationality but about the place where you are living or you choose to live.

Please tell me few words about the GHOST. What is the main focus of it?

GHOST is an independent and “self-sustained” publisher founded in 2011 by the Portuguese photographer Patr?cia Almeida and myself. It exists to give shape to editorial projects and artistic events. Its goal is to take part of the production of artistic and theoretical-practical contents in the most diverse ways (artistic researches, exhibitions, residencies, meetings and debates) that focus on an experimental approach. As a publisher, we are proposing to extend these initiatives through the appropriation of the produced contents and by reinvesting them in the shape of books or publications. We want these books to articulate a politics of image, that means critical approaches about the uses and the conditions of reception of an image, independently of its documentary, archival or fictional nature.

And of course I can’t ignore the question about current situation in Ukraine. From your point of view how do you consider it?

My personal point of view is that Europe as a political entity is failing again and again. And little by little it is loosing its legitimacy as a political project. Europe has no vision about its own fate. It is more and more an empty body filled with good intentions. Europeans are following the US, but the US are letting down the Europeans and they are lost. They constructed the European project only upon economical bases forgetting about the political aspects. The idea of cooperation, the desire of building a project together lost its fuel. We can feel that Europe is more and more divided into North and South, and another South is probably coming with the ex-communist countries (same preconceived ideas about laziness, corruption, black market, incapacity to compete with leading countries like Germany, UK or France), European countries are divided into extreme right ideology and neo-liberal ideology. Political parties (with the help of the medias) are playing with the fear of the people to impose their blind and destructive policy. In Portugal, people are feeling that they are loosing their freedom. They are reduced to obey, pay their taxes and shut up. These are not healthy conditions if you want to build political project.

The situation in Ukraine now is very preoccupying. What happens in Crimea reminds us what happened in 1938-1939 with the Sudetes but also what happened with Yugoslavia in the 1990’s. Europe is letting unbelievable things happen in exchange of peace and its own safety. And we know, by experience, that the price you are paying for this peace and safety is very high. And, as it was with Yugoslavia, it is completely against the fundamental principles that Europe promoted when it started.