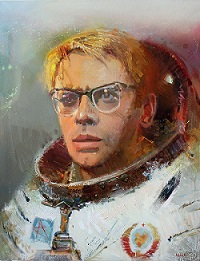 Moscow Museum of Modern art presents a project titled “Are you ready to fly?”, devoted to transformation and rethink of the images of the cosmonaut and the outer space in works of contemporary artists. The project contains works of more than 40 celebrated modern artists as well as artwork “Alexander the Great” by Igor Gusev. There are art objects, installations, paintings, sculptures, photos, video art. All of them have been created strictly in the 21st century.

The project reveals that the space topic is still relevant, though the attitude towards it has significantly transformed in the society, as well as in the contemporary art. It has changed from the rampant romantic appeal during the period of the first space flights, through the indifference of the late-Soviet period to the current ironically philosophical perception. For the artists of the first quarter of the XXI century, the Sky, the Space and the Universe, as well as the Cosmonaut as a personified object and subject of the Universe, are still a source of inspiration. These topics are no longer considered popular mythologems, but radicalize the notion of responsibility of the message, obligatoriness of comprehension of the scale of the idea.